Pazuzu Today marks the anniversary of the death of Mercedes McCambridge, American actress (1916-2004) Actress of radio, stage, film and television, Carlotta Mercedes Agnes McCambridge was titled “the world’s greatest living radio actress” by none other than the mighty Orson Welles. She began her career as a radio actor during the 1930s while also performing on Broadway and continued through … END_OF_DOCUMENT_TOKEN_TO_BE_REPLACED 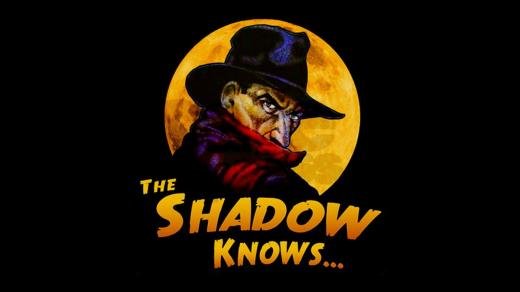 “Who knows what evil lurks in the hearts of men? The Shadow knows!”

The opening lines of the The Shadow, one of the most popular radio shows in history, captivated listeners and are instantly recognizable even today. Originally the narrator of of series of macabre detective tales, the eerie voice known as The Shadow became so popular to listeners that “Detective Story” was soon renamed “The Shadow,” and the narrator became the star of the old-time mystery radio series that went on air in August of 1930 and ran until 1954.

Even now, many decades later, the unmistakable introduction from The Shadow radio program, originally intoned by actor Frank Readick Jr., has earned a place in the American idiom: “Who knows what evil lurks in the hearts of men? The Shadow knows!” These words were accompanied by a an ominous laugh and a musical theme, Camille Saint-Saëns’ Le Rouet d’Omphale (“Omphale’s Spinning Wheel”, composed in 1872). At the end of each episode, The Shadow reminded listeners, “The weed of crime bears bitter fruit. Crime does not pay…. The Shadow knows!”

Never seen but only heard, the Shadow was an invincible crime fighter. He possessed many gifts which enabled him to overcome any enemy. Besides his tremendous strength, he could defy gravity, speak any language, unravel any code, and become invisible with his famous ability to “cloud men’s minds.”

Along with his team of operatives, the Shadow battled adversaries with chilling names like The Black Master, Kings of Crime, The Five Chameleons, and, of course, The Red Menace. The Shadow’s exploits were also avidly followed by readers in The Shadow magazine, which began in 1931 following the huge success of the old-time mystery radio program.

The magazine was published by Street & Smith and, recognizing the demand and responding promptly, circulation manager Henry William Ralston commissioned magician Walter B. Gibson to begin writing stories about “The Shadow.” Using the pen name of Maxwell Grant and claiming that the stories were “from The Shadow’s private annals as told to” him, Gibson wrote 282 out of 325 tales over the next 20 years: a novel-length story twice a month (1st and 15th). The first story produced was “The Living Shadow,” published April 1, 1931.

Gibson initially fashioned the character as a man with villainous characteristics, who used them to battle crime. Clad in black, The Shadow operated mainly after dark, burglarizing in the name of justice, and terrifying criminals into vulnerability before he or someone else gunned them down. The character was a film noir anti-hero in every sense, likely inspired by mentalist Joseph Dunninger and illusionist Howard Thurston, both close friends of Gibson. Gibson himself claimed the literary inspirations for The Shadow were Bram Stoker’s Dracula and Edward Bulwer-Lytton’s The House and the Brain.

Street & Smith entered into a new broadcasting agreement with Blue Coal in 1937, and that summer Gibson teamed with scriptwriter Edward Hale Bierstadt to develop the new series. As such, The Shadow returned to network airwaves on September 26, 1937, over the new Mutual Broadcasting System. Thus began the “official” radio drama that many Shadow fans know and love, with 22-year-old Orson Welles starring as Lamont Cranston, a “wealthy young man about town.” Once The Shadow joined Mutual as a half-hour series on Sunday evenings, the program did not leave the air until December 26, 1954.

Welles did not speak the signature line of “Who knows what evil lurks in the hearts of men?” Instead, Readick did, using a water glass next to his mouth for the echo effect. The famous catch phrase was accompanied by the strains of an excerpt from Opus 31 of the Camille Saint-Saëns classical composition, Le Rouet d’Omphale.

After Welles departed the show in 1938, Bill Johnstone was chosen to replace him and voiced the character for five seasons. Following Johnstone’s departure, The Shadow was portrayed by such actors as Bret Morrison (the longest tenure, with 10 years in two separate runs), John Archer, and Steve Courtleigh.

Over the course of 18 years, Street & Smith published 325 issues of The Shadow, each one containing a novel about the sinister crime fighter. These stories were written by Maxwell Grant, a fictional name created by the publishing company. Although several different people wrote under the pseudonym, Walter B. Gibson wrote most of the stories, 282 in all.

Most of the novels published have been reprinted in paperback and The Shadow adventures remain popular today, with Shadow comic books, magazines, toys, games, cds and cassettes of old-time radio shows, and books bringing top dollar among collectors the world over.

The Shadow provided inspiration for another Old Time Radio classic, The Whistler, whose protagonist likewise knows “many things, for I walk by night. I know many strange tales, many secrets hidden in the hearts of men and women who have stepped into the shadows. Yes, I know the nameless terrors of which they dare not speak.”

“This is Orson Welles speaking from London.” (Big Ben chimes). “The Black Museum, repository of death… Here, in this grim stone structure on the Thames which houses Scotland Yard, is a warehouse of homocide, where everyday objects, a piece of wire, a chemist’s flask, a silver shilling, all are touched by murder.” (dramatic music)

Following the opening Welles would introduce the museum’s item or items of evidence that was central to the case, leading into the dramatization. He also provided narration during the show and ended each show with his characteristic closing from the days of his Mercury Theater of the Air, remaining “obediently yours”.

Opened in 1875, the Crime Museum at Scotland Yard is the oldest museum in the world purely for recording crime. The name “Black Museum” was coined in 1877 by a reporter from “The Observer”, a London newspaper, although the museum is still referred to as the Crime Museum. It is this museum that inspired The Black Museum radio series, produced in London by Harry Alan Towers.

The series continued to be offered in syndication and was heard on AFRTS broadcasts and in the US on NPR stations through the 1960’s, 70’s and 80’s. Some shows were broadcast by the BBC in England in 1994.

This murder mystery series was based on true life cases from Scotland Yard’s files. Each episode was based on an item or items of evidence in the museum.

Harry Alan Towers produced the series from scripts written by Ira Marion. Music was composed and conducted by Sidney Torch.

The crime museum at Scotland Yard is not open to the general public but sereves as a resource for training police and  criminologists although it is possble to obtain permission to visit with good reason. A number of famous people have been admitted including Sir Arthur Conan Doyle. It is currently used as a lecture theatre for the police and those involved with or training in forensic sciences. While most of us will never has a chance to wander around the Black Museum, we can be grateful to Harry Alan Towers and Orson Welles for giving us a glimpse of what secrets are housed in The Black Museum

Agnes Moorehead: This marvelous actress was much more than Samantha’s mom on Bewtcihed; she was part of the backbone of Orson Welles’ Mercury Theater and one of the most talented and versatile voices Suspense and the Golden Age of Radio. Boris Karloff: The original Frankenstein’s Monster, Karloff was one of Radio’s great Horror and Comic voices. Bela Lugosi: Consistently type … END_OF_DOCUMENT_TOKEN_TO_BE_REPLACED

Opening in 1875, the Crime Museum at Scotland Yard is the oldest crime museum in the world. The name “Black Museum” was coined in 1877 by a reporter from “The Observer”, a London newspaper, although the museum is still referred to as the Crime Museum. It is this museum that inspired The Black Museum Old Time  radio series, produced in … END_OF_DOCUMENT_TOKEN_TO_BE_REPLACED