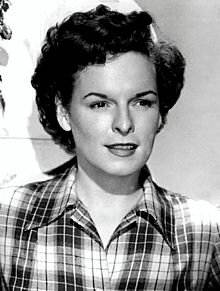 Today marks the anniversary of the death of Mercedes McCambridge, American actress (1916-2004)

Actress of radio, stage, film and television, Carlotta Mercedes Agnes McCambridge was titled “the world’s greatest living radio actress” by none other than the mighty Orson Welles. She began her career as a radio actor during the 1930s while also performing on Broadway and continued through the 40s and 50s. Her radio work in this period included: Lights Out, Inner Sanctum and CBS Radio Mystery Theater, and many other vintage Old Time Radio favourites that can be heard on Dark Arts Horror Radio.

She won an Academy Award for Best Supporting Actress for All the King’s Men (1949) and was nominated in the same category for Giant (1956). She also provided the voice of Pazuzu in The Exorcist (1973).